Dr. Michael Pittman, Research Assistant Professor and head of the Department of Earth Science’s Vertebrate Palaeontology Laboratory, together with eight international colleagues have developed a simple new technique to analyse fossils. Published in the open-access journal “PLOS ONE”, the technique, called laser-stimulated fluorescence (LSF), utilises lasers to stimulate fluorescence in fossils that normally don’t fluoresce under standard UV lighting, with the new view photographed through a camera lens. LSF provides an instantaneous, non-invasive, geochemical fingerprint of fossilised bone, soft tissue, integument (protective layers like skin and plant cuticles) and the surrounding rock matrix. It could mean many dinosaurs with laser beams on their heads, uncovering hidden fossils and a wealth of anatomical findings in the future.

For the PLOS ONE journal article, please visit here. 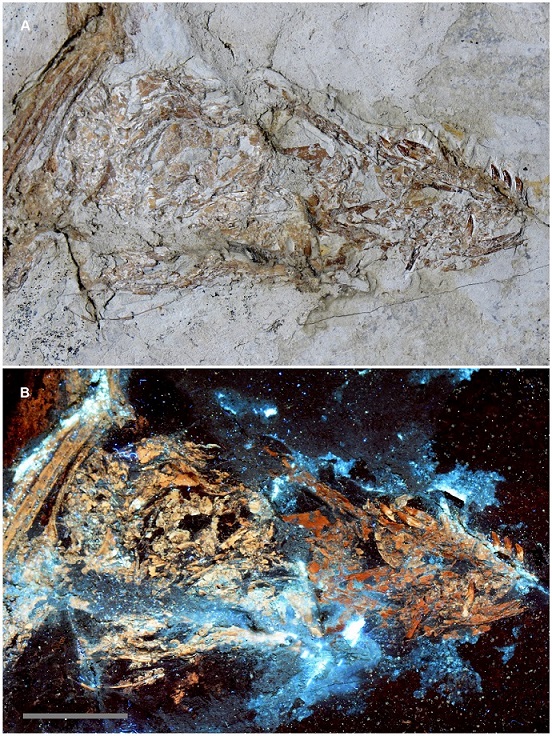 The skull from specimen IVPP V13320 of the gliding carnivorous dinosaur Microraptor: is it a composite? A (top), the skull of IVPP V13320 under white light conditions shows subtle colour differences in the bone across a break in the rock slab – darker bone proximally and lighter bone distally. B (bottom), Under laser light stimulation, the bone fluoresces with the same colour pattern observed under white light conditions (see A) indicating that the colour differences relate to differences in the fossil’s mineral composition. The latter indicates that the skull is a composite specimen, but it is also possible - but less likely - that the pattern observed reflects variability in the conditions under which the animal was deposited and eventually transformed into rock. Scale bar 1 cm.