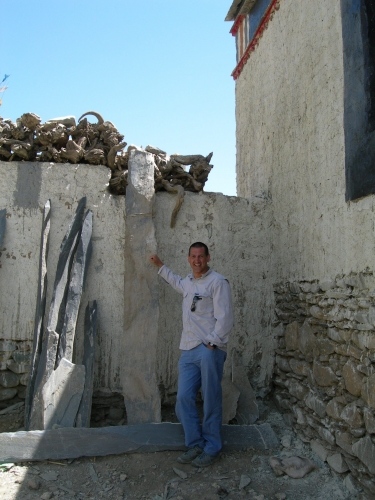 It’s not often one gets the chance to snag a world record, so when the opportunity arises, it’s wise to grab it with both hands.

Associate Professor Dr Jason R Ali joined the University’s Department of Earth Sciences in the spring of 1997. As part of his duties, he was asked to teach part of the course on Structural Geology, which looks at how and why rocks deform. For his preparations, he consulted several textbooks and was drawn to a 1996-published work that ran to almost 800 pages. Entitled, “Structural Geology of Rocks and Regions”, it was authored by two famous US-based geologists, Professors George Davis and Stephen Reynolds.

"I was attracted to the book because of its incredible detail and the extensive use of carton graphics that explained so clearly many key features/phenomena associated with the subject. As a teaching resource, it offered much potential.”

As Dr Ali was writing his lecture on “Fabrics”, he consulted the relevant chapter and discovered that structural geology had a world record category: largest pencil cleavage. Pencil cleavage develops when certain types of rock are squeezed into folds resulting in them partitioning into millions of pencil shaped fragments. Typically, they are 2-10 cm in length.

In 2000, Ali began working with his department’s Tibet Research Group, and this saw him make regular trips to the plateau, often once, sometimes twice per year.

"We would invariably drive along the main southern Tibet highway and just to the west of Lhatse town, at the junction where the road to Mount Everest and Nepal connects, I noticed outside many of the houses and farms large pencil-cleaved rocks that the local people had collected from the nearby hills. The villagers sold them for use in buildings and as fence posts”.

Ali reckons he passed the spot 5-6 times before on a 2007 trip he finally said to his colleagues “Can we stop so I can check the rocks?”

"Within seconds, I realized I was in World Record territory; after ten minutes I had located the daddy of them all, a 2.6 m-long behemoth.”

Soon after arriving back at Hong Kong, Ali selected 3-4 of his best pictures and attached them to an email he sent to Professor Davis. The following morning he opened the reply:

"Dear Jason – without doubt your fame will rise further as you command the record! What fascinating structures, and to think they are used in house construction and (as) fence posts!”

The next several years were a bind as Ali had to wait for Edition Three of the textbook to appear and he was worried that his discovery may have been usurped. Finally, in late 2012 email flyers were circulated by the publisher Wiley announcing the book’s impeding arrival, this time authored by Davis and Reynolds, plus their colleague, Charles Kluth.

"Libraries are renowned for their quiet ambience and I cannot imagine too many library staff handing over a book and then for the recipient to immediately celebrate as if they’d just scored the winning goal in a Champions’ League final.”

As the next edition of Structural Geology of Rocks and Regions won’t appear for about a decade, it’s likely that Dr Ali will be able to claim the title as the discoverer of a World Record geological feature for the rest of his HKU career. He’s delighted as he hopes it will emphasize to hundreds of future undergraduates that the Earth Sciences are really interesting and great fun. As he says, “What better way to include in an introductory class for a BSC course the revelation that the professor is a World beater!”